Short a quarter of soap

In spite of the government’s initiative, the refugee camps in Northern Uganda are still bursting at the seams. 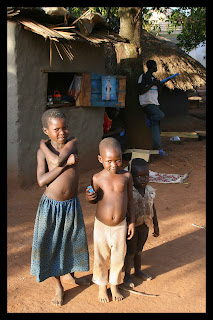 Shanty towns, made up of innumerable clay huts, each numbered with chalk, engulf the landscape. Proud mothers, grandmothers and clan elders pose for photos, each in front of the makeshift housing they’ve called home for over 20 years. When they find out that a white journalist is coming to visit they arrange the hut especially by bringing chairs from the neighboring camp. I sleep on a rented bed with the clan all around me on the floor. At night a noise wakes us up – rats. Young girls carefully light up kerosene lamps – each match has here a value. I invite them to join me on the bed but they refuse. In the morning the members of the clan will have nibbled fingers, rats will have mercilessly tortured their hands.

The influx of aid workers to Acholiland is gargantuan - during a short interview with one of the UN officials I learn that in Gulu – the epicenter of the 22 year old war – the number of registered NGO’s (4,000) already outnumbers the official figure for street children in the entire town. 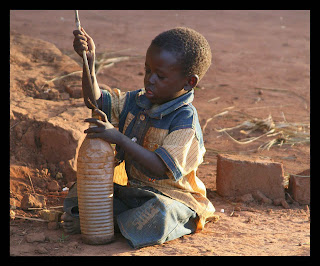 Nonetheless, initiatives on the ground are scattered and many are out of place. The distribution of 15,000 free treatment cards for health centers by one NGO seems ridiculous when contrasted against the fact that people are still living beside waste dumps and filthy latrines – the very sources of the bacteria and diseases that are decimating the camp. The promotion of mosquito net use, distributing condoms or the promotion of healthy lifestyles seems to fade in comparison when the everyday battle is for something more important, more fundamental. Food.

When 4 years ago the World Food Programme systematically supported refugee camps in Northern Uganda, each of the families would get around 50 kg of maize monthly. For 8-10 people. Today there is no maize and I can’t really figure out what the habitants of the camp eat. They themselves find it hard to answer the question ‘How are you able to survive with no job, no income generating activity and insufficient support from the NGO’s working on the ground? 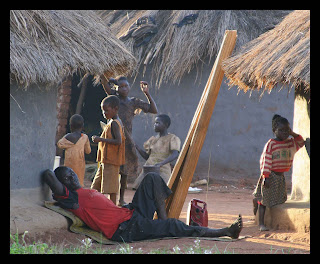 When I ask about our supper they answer with a toothless, genuine smile. I soon find out that our meal will consist mainly of white ants, a realization for which my stomach is going to pay a high price. The meal, made up of roots, ants and some maize mixed with sand, grinds down teeth. The sound of masticated gruel is accompanied by an orchestra of clicking cicadas, and the noise of bonfire parties where one beer is mixed with water so that it suffices for ten.

Before talking to the self-appointed chief of the camp, activists of the local NGO’s advise me to buy a box of blue soap for the camp inhabitants. We cut it in quarters. This will meet the needs of a few dozen families - one quarter for one family for one month.

According to local NGO officials, there are around 146 people dying daily in the IDP camps in Northern Uganda, mainly from disease and hunger – resulting in death toll higher than that have suffered in the Iraq War. 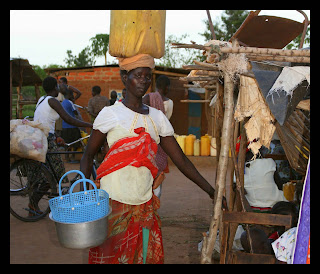 It’s quite intriguing how the leader of the LRA, Joseph Kony, a semi-illiterate man who hardly went beyond Primary Seven and is not a known military strategist, could sustain a rebellion for over 23 years and remained elusive. Thus far, not only didn’t he lay his arms after the 2006 agreement between Uganda’s government and LRA but he also evaded signing the final peace agreement in Juba by not turning up on the prepared meetings. After all, the Ugandan government has been agreeing to meet the demands of the rebel, who is hiding in the Democratic Republic of Congo, promising to protect him from his arrest warrant released by the International Criminal Court in 2005.

As explained by the president’s opponents such as Dr Kizza Besigye, one of the main factors which have kept the war in Northern Uganda going on for two decades was its political functionality for President Yoweri Museveni and his National Resistance Movement. It would also explain the allegations of the presence of so called ‘ghost soldiers’ in the UPDF army, a fact strongly denied by the Uganda government. One way or another, a rebellion group accounting for 500-1000 soldiers sneering at the rest of the world in the XXI century seems impossible.

In the evenings I try to listen to as many stories as possible from the little refugees from Lord’s Resistance Army. The most moving is the story of a 25 year old, Monica Odong. Kidnapped as a 7-year-old she had no concept of the situation she was in. ‘They told us to kill our brothers and sisters because we were too numerous to enter Sudan as an entire group– they said that that was how we were going to gain strength. While marching through the bush, I would stumble over other children’s bodies.’

Children have borne the biggest brunt of the conflict – an estimated 30,000 children have been abducted and forced to join the rebel’s ranks to serve as child soldiers. Abducted children became Kony’s soldiers and servants, the leader himself is a husband to over 70 of the kidnapped girls and a father to over a hundred of their children.

In the Joseph Kony’s army you are not supposed to oppose his will. If you spoke when not requested to, they would cut off your lips. If you objected in any other manner, you would be faced with a question: “do you want a short or a long sleeve?” the answer of which results in your arm being cut off at the elbow or the wrist.
In the camp I met many refugees without limbs, ears or noses. They tell me their stories.

When the animosity reaches irreconcilable levels 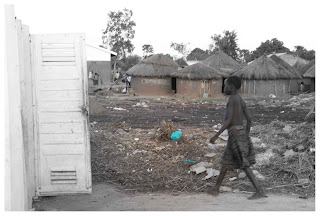 After a dozen interviews with the former abductees, I realise that the Eurocentric perspective is not compatible with the mentality of the Acholi tribe. When asked in the event of Kony’s return would the local community forgive him, I kept on hearing a positive response. The fact that he is guilty of the genocide of the sons and daughters of the tribe fails to convince my interviewees. ‘If he comes back, I will forgive him’ – the answer resounds like an echo.

I start to question myself and try to figure out whether this response is a result of the fear of being recorded or the colour of my skin, or maybe just lack of trust despite my assurance I wouldn’t release their names to the public.
- It’s Mato Oput – they explain. – Acholi’s tradition to forgive anybody who committed an offence. “Our tradition lasts for ages and we won’t disgrace ourselves with the thirst for revenge”. I can’t believe it – I explain to young Monica Odong – “don’t you hold it against Kony for killing your mother and father, for depriving you of your childhood and your virginity, for depriving you of joy of life?”
- “I don’t know” – seems the first honest answer I heard – “What I am sure of is that if I hold it against him, the conflict will never end. Or maybe if I meet him, I would kill him” – she adds after a while. 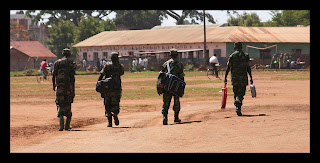 In March 2009, the Ugandan government began closing the camps for Internally Displaced People and together with many aid agencies begun to encourage the tens of thousands of people to go back to their ancestral villages. The widespread rumour is that the conditions in the “resettlement camps” are worse than in the IDP camps. The refugees are returning to a place with no food, no wells, no clean water, remote from humanitarian aid. In the mean time hunger and starvation are widespread. People are dying of starvation and water borne diseases, such as MAD (Malaria, Anemia or Diarrhea.) The new camps have just slightly more space between each home and the tragedies are more hidden now and out of sight.

The names have been changed to protect the innocent

----------
LRA - the Lord’s Resistance Army is a sectarian militant group based in Northern Uganda, which originated in 1987 from the original Holy Spirit Movement (HSM).
The group is engaged in an armed rebellion in what is now one of Africa’s longest-running conflicts. It is accused of widespread human rights violations, including murder, abduction, mutilation, sexual enslavement of women and children, and forcing children to participate in hostilities.
On December 28, 2008 LRA rebels hacked to death 189 people in Faradje, Doruma and Gurba in northeastern Democratic Republic of Congo (an estimate by The United Nations Office for the Coordination of Humanitarian Affairs). Efforts in early 2009 by the Ugandan army in a military action called 'Operation Lightning Thunder' didn’t result in the capture or killing of Kony. Rather, it lead to a brutal revenge attacks by the LRA, with over 1,000 people killed in Congo and Sudan.
Posted by Helena Gołdon at 04:52

This application is created by interactive maps.
You can also have your visited countries map on your site.

If you see this message, you need to upgrade your flash player.